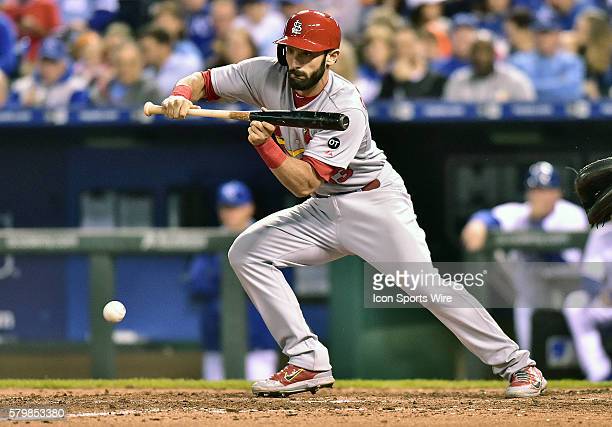 Ever since teams started shifting against left-handed hitters, crowds of eminently knowledgeable baseball fans have been screaming for those lefty hitters to bunt against the shift. As Mr. Baseball Genius Extraordinaire sees the second baseman pulled into shallow right field, the shortstop looking lost on the wrong side of the bag, and the third baseman pulled a furlong and a half away from the 3rd base line, I can hear him screaming at the TV, “Just bunt the damn ball right down the line! Even Matt Carpenter could run for days!” “He should bunt every time to beat the shift!” Eventually someone like Matt Adams would try to bunt to beat the shift and said baseball genius would scream out “Finally!” as the bunt trickles foul along the 3rd base line. “I don’t understand why he doesn’t always do that!”

Defensive shifts are changing the way in which the game is played and it’s becoming increasingly difficult for left-handed hitters because those shifts are taking away a lot of what used to be hits and turning then into routine ground outs. Even a hard hit ball to right field often ends up in nothing more than a 4-3 ground out as the 2nd baseman is positioned in short right field specifically to take away those base hits. This leaves the 3rd base line open but left-handed hitters don’t often hit the ball down the 3rd base line.

Below you’ll find a diagram of all of Carpenter’s batted balls for the 2017 season. The green dots are his ground balls. It’s pretty clear by looking at the diagram that his fly balls tend to go to left-center field and left field more than right but his line drives and ground balls are predominantly to the right side. Knowing that, how would you position your fielders if you were defending Carpenter?

Carpenter is, therefore, a perfect candidate to lay down some bunts in order to reach base more often but there are 2 primary reasons why lefty batters don’t “do that every time!!!!” The first is that homers and doubles are much more valuable than bunt singles. It may surprise you to learn that bunts rarely, if ever, turn into home runs. It’s extremely rare. (I actually went looking on baseball-reference to find the number of bunt home runs in MLB history but there was no way to look for one in the play index. A google search came up with videos of Brian Dozier and Steven Souza hitting bunt homers but they’re both actually bunt singles with errors that turned them into “Little League Home Runs.”)

The 2nd reason players don’t bunt that often against the shift is that bunting major league pitching, especially when the hitter is trying to surprise the defense, is really freaking hard. Fans sit at home crushing a bag of Funyuns thinking that bunting against Aroldis Chapman is something anyone can do anytime they try but it just isn’t that easy. Nevertheless, neither is hitting against the shift.

Bunting against the shift is easier for a lefty hitter to pull off than a right-handed hitter because the 3rd base line is exploitable. First basemen don’t leave the 1st base line open against righties because they have to get to 1st base to catch the throws from whoever fields the ball. The Cardinals basically only have 3 left-handed hitters — Carpenter, Kolten Wong, and Dexter Fowler (switch-hitter). I’m not going to worry about Greg Garcia for purposes of this discussion because, you know…Greg Garcia.

The table below shows the 3 hitters’ wOBA against the shift in 2017 and their wOBA on ground balls in 2017 (per fangraphs).

So Wong actually performed better against the shift last season than he did overall but Carpenter and Fowler were dramatically worse and all 3 hitters were much worse on ground balls than they were overall (not a shocking result, to be sure).

So in order for us to suggest that they bunt more often, they would have to be able to do better when bunting the ball than they performed when they weren’t bunting. In 2017, both Wong and Carpenter performed very well when bunting for a hit. Wong had 4 hits in 9 attempts when bunting for a base hit and Carpenter had 4 hits in 7 attempts. Fowler, on the other hand, had no bunt hits in 2017 even though he is the fastest of the 3. Of course, even a guy like Carpenter who’s (ahem!) a bit challenged on the bases can get bunt hits because of where the 3rd baseman is positioned. Even though Fowler has no bunt hits last season, he was 2 for 5 in 2016, 3 for 8 in 2015, and 3 for 5 in 2014 so he clearly knows how to bunt.

Now, obviously, all these bunt hits are going to be singles so a batting average of, say, .400 is going to end up with a slugging percentage of .400 also an OPS of .800. Guys like Fowler and Carpenter who can hit the ball out of the park with some regularity should be judicious about how often they bunt but I think it’s fair to say they should be bunting more often than they are, especially considering how most hitters perform against the shift.

Still, these 3 guys have all had a high degree of success when bunting for base hits in the past. There’s no reason that can’t continue in 2018. If they could, between them, bunt for a .400 or higher average, then how many times should they attempt to bunt for a hit? The answer is, first of all, that they should clearly bunt for a hit more often against lefties than righties, at least for Wong and Carpenter. For Fowler, that’s more difficult to determine because, even though he was much better vs. righties last season, he’s been much better vs. lefties over the course of his career.

So against the shift, the 3 should bunt more often — possibly a lot more often — until teams change the way they set their defense. It’s a classic game theory situation, with the Cards’ hitters all being quite good bunters and the defense — to this point — allowing those 3 to bunt so as to better defend ground balls and line drives that are pulled to the right side. In my mind, it wouldn’t be too many if they each decided to bunt 15-20 times this season as long as teams allow them to do it and they can do so successfully.

Teams are sacrificing a lot less often as they’ve come to realize how valuable outs are and that it doesn’t make a lot of sense to give them up for a small gain. But bunting for hits can and probably should be used more frequently because of the frequency with which teams are deploying defensive shifts. Fortunately, the Cardinals have 3 guys who can use their ability to bunt to take advantage of these shifts, thus putting more bodies on the bases and giving the team more scoring opportunities.

Since the season ended, there’s been a ton of hand-wringing about the problems the Cardinals’ offense encountered during the 2015 season.  A few examples:

These, of course, aren’t indicators of a below-average offense but, when we’re playing in a division against 2 of the best teams in baseball, a mediocre offense going forward just isn’t going to cut it.  Add to that the fact that players like Matt Holliday, Jhonny Peralta, and Yadi are already past their offensive primes and aren’t going to get any younger.

We know that several players just didn’t perform to expectations this year but the real problem is the number of times these underperformers were forced or allowed to come to the plate this season.  Every team has underperformers.  But it creates real problems for a team when those players get too many plate appearances.

Below are the numbers in 2015 for the team’s biggest underperformers.

141 batters qualified for the batting title in major league baseball in 2015.  Only 5 of them had a wRC+ less than 70.  These 6 Cardinals combined for an offensive performance 30% worse than league average and the team gave them 1350 PAs.  Just for reference, 23% of the team’s plate appearances went to players who hit worse than Padres’ pitcher Tyson Ross.  That’s 1 out of every 4 plate appearances — not counting the 353 PAs we gave to our pitchers.  So 3 times out of every time through the order we either let a pitcher bat or someone who hit worse than Tyson Ross.  Jay and Bourjos, who were horrible in 2015, got 120 more plate appearances than Randall Grichuk did.  No wonder we had trouble scoring runs!

Adams started slow and dealt with a hamstring injury for most of the season.  He may have a bad stretch where he hits as badly as he did in 2015, but he’s unlikely to repeat this performance over 350-400 PAs.  Reynolds didn’t really underperform so much as that he had to take on too many PAs due to Adams’s injury.  Regardless, I wouldn’t bet money on Reynolds returning in 2016.

Similarly, it’s unlikely that Bourjos will return.  I suspect that the emergence of Pham has made Bourjos expendable.  He’ll be tendered a contract and traded.

Cruz and Kozma are tough.  The only reason they were on the roster is that we need a backup catcher and someone who could play shortstop in the event of an injury to Peralta.  The team, therefore, may be forced to sacrifice some offense in order to get this sort of defensive protection.  But the team has to do better than what these 2 can bring to the table.  We’ll discuss this in more detail another time but, suffice to say, we can’t afford to give 260+ PAs to players who hit worse than many pitchers.

A lot of Cards’ fans are looking for a better #3 hitter or more homers than Heyward provided (13) from our cleanup hitter.  Our starters, for the most part, performed pretty well offensively so probably what we need most, is more depth.  We need our reserves to perform better when there are injuries to Holliday, Peralta, or Molina or when our aging starters need days off.  If we get more from our 9th through 13th position players, we can afford to give our starters more rest and we’ll score more runs doing it.