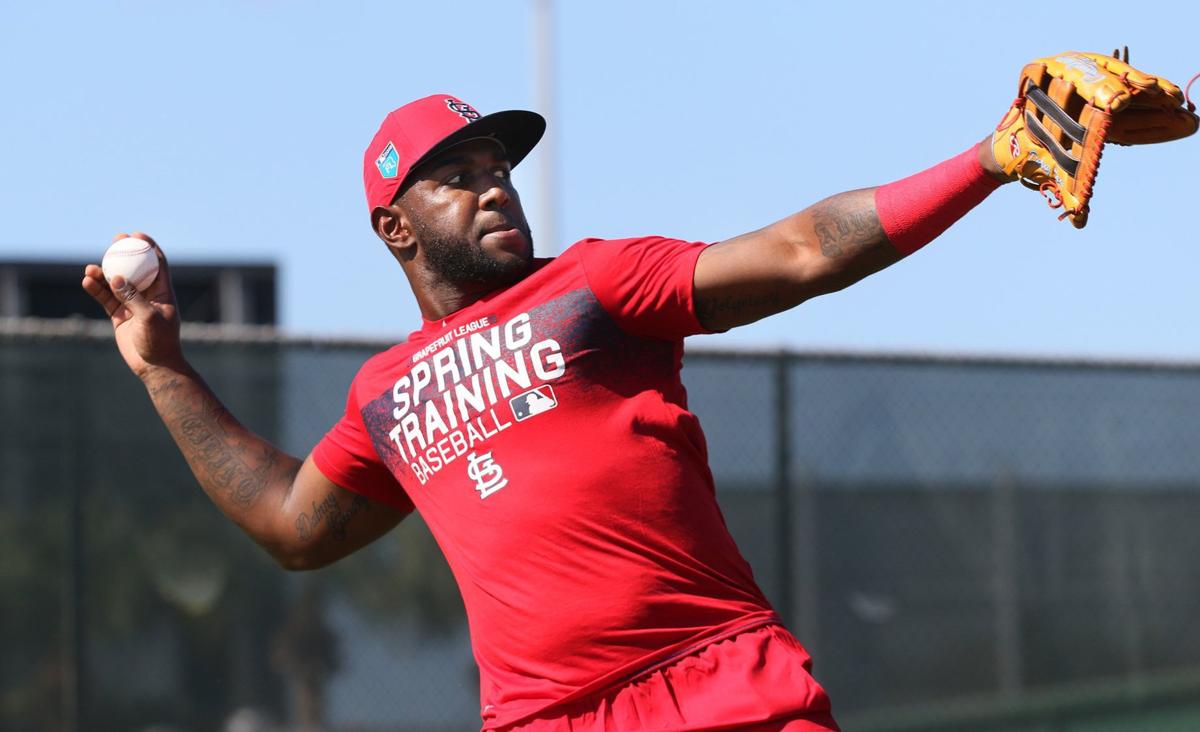 In 2003, Cards’ star Albert Pujols was having a lot of trouble throwing the ball and, as a result, Jim Edmonds and Edgar Renteria had to go deeper into left field to help Pujols get the ball back into the infield whenever he had to throw the ball. The team decided that since Pujols was such a great hitter they needed him in the lineup and the only way to “fix” Pujols during the season was for him to undergo surgery that would remove him from the lineup for several months. They basically played with 8 defenders in order to get Pujols’ bat in the lineup everyday. Ben Godar over at Viva El Birdos did a great write-up on this a couple of years ago. Pujols ended up being a win player despite the defensive limitations.

Yesterday during the Cards’ 6-2 loss to the Mets, a fly ball was hit to left fielder Marcell Ozuna with a runner on 3rd base. Since there was an impending throw home, Tommy Pham ran all the way from center field, cut Ozuna off to catch the ball, and threw the ball toward the plate. This was clearly a ball that should have been played by a left fielder who could get behind the ball and make a strong, accurate throw home and yet Pham kept Ozuna from making that throw.

Here’s the field view of the Mets’ outs yesterday.

The second red dot from the left is the fly ball in question. On twitter yesterday, here’s what Derrick Goold had to say:

Marcell Ozuna has been receiving treatment on his shoulder, and he said it's much improved from the start of spring training. Not quite full-strength, but "much better, all good, getting there." Tommy Pham says if Ozuna's "arm is healthy I don't do that." #stlcards #MLB

Goold’s article this morning repeated that quote from Pham.

This wasn’t the only instance where Ozuna’s ability to throw was limited, however, as VanHickslestein pointed out on Twitter during yesterday’s game.

Frazier's double in the 1st, with DeJong in short LF pic.twitter.com/9NBTR6pt14

Notice how far Paul DeJong goes out to left field to catch Ozuna’s cutoff throw to the plate. Needless to say, DeJong’s relay was very late which shouldn’t be a surprise since he could probably flag down a cab at LaGuardia from where he’s positioned when he catches Ozuna’s throw.

So it’s clear that this is a pre-ordained plan for Ozuna at least for the time-being, as both Pham and DeJong are in on the strategy, much as it was in ’03 when Pujols was relying on Edmonds and Renteria. When asked whether or not Ozuna should be on the D.L., here was Goold’s response:

If he played third base or second base or shortstop maybe. He's a hitter and he's there to hit and in the outfield they can limit his throws. Also, his arm his sore. It isn't fractured or ruptured. Sore.

It’s true that outfielders just aren’t asked to make all that many really important throws. Ozuna was brought to St. Louis to bat in the middle of the order and, though he hasn’t had any hits in the first two games, he is batting 4th and it is just 2 games. Maybe it would be different if he was a shortstop. Still, it’s also true that the team has a left fielder who can’t right now even make the most rudimentary throws. It’s also true that the Cardinal organization is deepest in pitchers and outfielders. Finally, it’s also true that the team has an outfielder playing 1st base and he’s missed 2 pretty fundamental plays at 1st base in the first 2 games of the season. This just isn’t like in 2003 when the gap between Pujols and everyone else was much greater.

There are, as far as I can figure, 3 possible reasons why the team hasn’t DL’d Ozuna.

We have to be hoping for scenario 2 above. His arm just needs some time to heal and then he can be a fully functioning left fielder as well as the impact hitter in the middle of the Cardinals order that the team traded for over the winter. Still, 10 days on the D.L. isn’t that long to be without Ozuna and the team can put Martinez in the outfield and Gyorko and Yairo Munoz in the infield and not be that much worse over those 8 or 9 games. The team would surely call up Harrison Bader who is ready anyway and the offensive drop off would be very small while giving the team a left fielder who can throw the ball.

Considering the fact that the team is extremely well-positioned to deal with a short D.L. stint by Ozuna, it raises the question as to why he hasn’t been placed on the D.L. given his current limitation. If it is just going to take a little time for the sore arm to heal, why make any throws at all, especially since the team has the depth to handle a short-term loss? Is the answer really that his sore arm isn’t going to heal on its own at all and that the only solution — as it was in 2003 — is surgery and a very lengthy D.L. stint? Given the questionable history of the team’s medical staff, it’s reasonable to wonder how bad Ozuna’s arm really is right now.